Recently a coworker asked what he should do to pass an int into a method, change it, and then get the changed variable after the method ends. Apparently simply returning it was not an option! I suggested wrapping the variable in an Object with a getter and setter. Another coworker suggested creating a single element int array containing the value.

A somewhat heated discussion occurred as I debated it’s more semantically correct to use an object, while my coworker suggested that creating and using an array is faster.

But we’re programmers, let’s write some code to figure out which is faster!

Here’s the testing code that simply runs the test, records how long it takes and prints the results.

To test mutating the variable using an array, we have this code:

Finally, to test mutating the variable with an object, we have this: 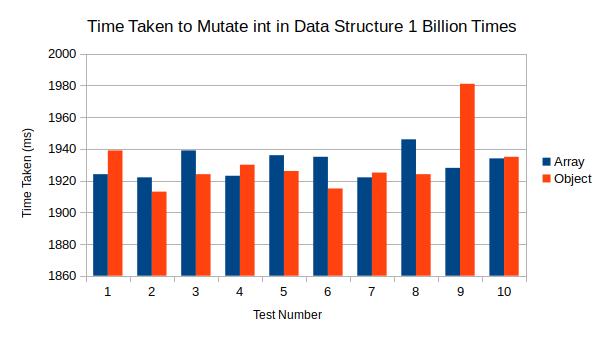 After running each test a billion times, 10 times each, the results are surprising. There is practically no difference in speed when using an array vs an object. This shows how efficient object creation is in Java, demonstrating that java programmers shouldn’t be scared to create objects.

It also shows that I was right! ;)